Heat capturing equipment, food composting and algae tiles have been named amongst the innovations that could deliver costs savings of more than £640,000 while reducing key climate impacts for engine manufacturers Cummins.

Figures released by Cummins suggest that the innovations have the potential to deliver the aforementioned cost savings alongside a two million kilowatt-hour reduction in energy consumption, an extra 1,000 tonnes of recycled waste and reducing water consumption by more than 19m litres

The Gateway was launched in partnership with Marcela Navarro, the chief executive of Business Cubed, who used her expertise to scout out ready-to-implement innovations to boost the sustainability agenda at Cummins.

“With so many high impact solutions failing to reach the market due to perceptions of high risk and costs, genuine industry-level sustainable innovations are not able to scale up,” Navarro said. “I am delighted to be working with Cummins and the Environmental Gateway Project team, to accelerate the economic, environmental and social impact of tested and viable sustainable innovations in Cummins value chain, at pace.”

Navarro and Business Cubed were brought in to provide valuable insight and guidance for fostering innovation. Until 2015, Navarro was the head of customer innovation for the Royal Bank of Scotland (RBS).

The Bank’s Innovation Gateway was set up through Navarro and saved more than 40,000 tonnes of CO2 and 200m litres of water in its first proof-of-concept year, equating to savings of £7.5m when rolled-out across its estate.

RBS trialled electric car clubs, energy systems that adjust using real-weather data, and central heating additives, on top of nine other ‘eco-innovations’, on its buildings in Bristol. A further eight green innovations were also trialled at its world headquarters in Gogarburn as part of its innovation sponsorship programme.

If Cummins can mirror some of these successes it will go a long way to helping the firm reach its 2020 sustainability targets. The company expects to reach an annual emissions reduction of 3.5 million metric tonnes in that timeframe, reduce direct water use by 33%, increase recycling rates from 89% in 2014 to 95% and reduce energy use and emissions by 25% and 27% respectively against a 2005 baseline. 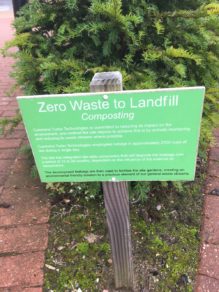