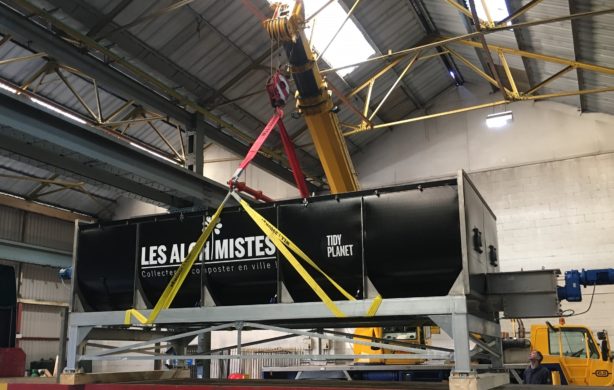 Organic waste expert Tidy Planet has expanded its globally-acclaimed range of Rocket Composters, with the creation of the B1400 – a machine specially-commissioned for its French distributor, Les Alchimistes’ large-scale composting project in the middle of the River Seine.

The French social enterprise is dedicated to increasing the value of food wastes on a localised and social scale – with community reintegration at the heart of its projects – collecting this waste stream, by bicycle, from supermarkets, restaurants, and hotels from across the French capital.

Last year, the firm launched its pilot urban farming venture – with the help of four A900 Rocket Composters from Tidy Planet – which sees the city’s disused underground car parks used as composting sites. Due to the project’s resounding success, Les Alchimistes has received support from the French Government and EU funding, to launch its latest and biggest waste-to-resource project, in city-centre Paris.

The Lil’O composting Project is located on an island in the River Seine – known locally as L’Île-Saint-Denis – 10km north of the Eiffel Tower. It was previously used for the storage of building materials and municipal vehicles and is set to be regenerated as a composting nucleus, now that it’s home to a newly installed B1400 machine.

Les Alchimistes needed equipment that would process up to two tonnes of a mix of food and shredded wood wastes every day – in line with the site’s waste processing threshold – and this was the catalyst for the commissioning of the B1400.

Commenting on the collaboration, James Tyler, director at Tidy Planet, said: “It’s amazing to be part of this sustainable and innovative venture.

“When designing the B1400, there was a lot to take into consideration. It had to be ‘portable’, so it could be easily transported by road, whilst also adhering to the French Government’s legislative waste-processing parameters – it’s a great addition to our current Composter range.”

A smaller version of its sister unit, the B2500, the B1400 is a twin-shaft composting system, that allows the company to maximise its ability to collect more food waste, with minimal handling and space requirements. A distinctive feature of the machine is the new GSM and internet-linked control package, which allows the manufacturers and operators to log performance, plus monitor and adjust the running parameters from anywhere in the world.

“Our composting and growing projects throughout Paris aren’t just environmentally-friendly though, they are also socially-inclusive.

“The team carries out the entire biowaste-to-compost process, right through from the pedal-powered collection, to the seed growing and composting.”

With a huge focus on sustainable waste management and innovative solutions, Les Alchimistes is leading the way in greener and more environmentally-friendly solutions to other disposal alternatives such as landfill.

More B1400 projects are set to be introduced across the rest of the country over the coming year, and an A900 model is soon to be shipped for another of the organisation’s composting and commercial food waste collection projects in Lyon.

France is a country which has been spearheading international food waste management agenda for the past few years. Back in 2016, it was the world’s first country to ban supermarket waste – implementing fines for stores that do not donate unsold foods to charities and food banks.