5387 Miles away from grey and gloomy (at the time of writing) Macclesfield, lies the sun drenched Maldivian resort of Gili Lankanfushi, recently rated probably one of the, if not the best resort locations in the world to holiday at. Nestled in tropical gardens the luxury resort is on its own private island in the Laccadive Sea on the North Male Atolls. The holidayers to the Island get to lounge in overwater villas, returning to the main island by boardwalks, jet ski’s or speed boats to dine on the best local and world cuisine. 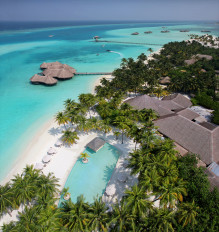 The difficulty with being such a remote destination is just that, remoteness. Getting fresh goods and food to the site is a task in itself, as is disposing of the waste that the holidayers and business creates, but recently the two were brought together in a cyclical approach for one of the wastes, food. Take a little closer look at the island itself and a venture to the heart and workings of the resort and nestled behind the kitchens is one huge growing plot, abundant with fruit trees, planters and vegetable gardens. But now take an imaginary look at your feet and what your flip flops are treading upon and what slips between your toes. This is essentially a “desert island” there’s not exactly much soil for growing in. 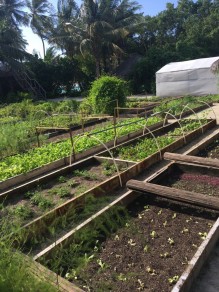 So to solve the problem of a lack of growing medium, to reduce the need for sending food wastes off site for disposal the head chef took to the internet and found us, good old Tidy Planet, in grey and rainy Macclesfield. What can we do? We can supply and install a Rocket Composter and dewatering system, that what we can do – so we did. Four weeks after installing the system and having some expert training from the team at TPHQ the site produces it’s first compost, 4 weeks later it’s being used in the growing beds to provide the much needed nutrients and soil structure. The fruit and vegetables going straight back into the fine dining at site. 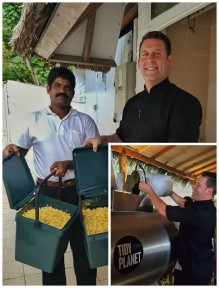 Above: Head chef John Bakker right loads the first bucket of food waste into the composter, Below; the compost produced after 2 weeks in Rocket 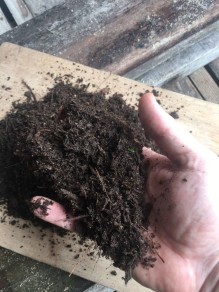