FIRST A700 ROCKET IN THE NETHERLANDS FOR CITY OF HENGELO

The Municipality decided after consulting with Tidy Planets distributors for Western Europe, Eco-Cycle in Heerhugowaard, that a pilot project should be implemented in 2016 and that at the heart of the project a Rocket A700 Composter would be the right tool to help them start their feasibility study and food waste collection roll out. 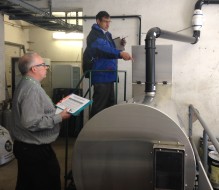 The food wastes will be collected at the start from around 250 of the 36,000 households in Hengelo and brought to a centralised facility that grows fruit and vegetables for the cities market. The compost produced from the pilot project once tested for stability and nutrient levels, will be used to complement the existing need for compost at the enormous growing site.

Whilst the project is underway on a relatively small scale, the Municipality will be able to gain valuable data on participation rates, contamination levels, success of marketing strategies and communications with the public, as well as the scientific information on the physical properties of the compost that can be produced from a material that is currently disposed with general wastes via energy recovery / incineration.

To boost their knowledge of Rocket Composting the city sent a delegation to meet fellow food waste composters and growers, at the University of Liverpool in early March. Having discussed the ups and downs of feed materials and seen how a city centre campus can grow vegetables successfully on rooftops, the delegation were also treated to an extra in depth training session on food waste composting by the manufacturers Tidy Planet and a lesson in aquaculture by the University.

Throughout the project both Tidy Planet and distributors Eco-Cycle will be supporting the Municipality with their experience and knowledge of composting and information from historical UK inner city food waste collections. The A700 Rocket is nearing its final build completion date and is set to land in Hengelo at the end of April 2016, with composting starting in earnest under many watchful eyes in early May.