Closed-loop food waste management is a growing trend in hospitality

Like single-use plastic, food waste is one of the most widely debated topics within the hospitality and food service sector (HaFS), and an increasing number of hotels and restaurants are looking for ways to close the loop on their food waste management. Our composting expert Huw Crampton recently shared his thoughts with FoodChain about how establishments can achieve this and the associated benefits of doing so…

With a brighter spotlight shining on how the nation deals with its waste, it’s no surprise that environmental consciousness and responsibility have scaled the agendas of many hotels and food service outlets over the past few years.

But it’s the fast-paced, and somewhat throwaway, nature of the HaFS sector – especially when entering luxury resort territory – which means it’s one of the highest contributors of waste. And not only is this reality harshly impacting our environment, but according to environmental not-for-profit organisation WRAP, it’s also costing businesses around £2.9 billion each year.

In fact, the government estimates the UK’s annual food waste figure at 10.2 million tonnes – one million of which stems from the hospitality industry. So, more questions are being asked around how to decrease and effectively manage food waste for a positive impact on the environment, as well as businesses’ bottom lines.

In a bid to reduce plastic and food waste, we’ve seen many anti-waste measures implemented across multiple industries – for instance, major food chains eradicating plastic straws and coffee cups in favour of paper alternatives, as well as supermarkets offering ‘wonky veg’ boxes. However, with several studies uncovering that these ethical alternatives are either non-recyclable in the UK’s current recycling infrastructure or aren’t being segregated from general, contaminated waste bins, are these efforts simply a greenwashing tool to give the appearance that businesses are ‘doing their bit’?

Sometimes this may be the case, but now we’re seeing a growing trend that favours more on-site solutions – which don’t rely on the end user making an ecological choice – such as composting. 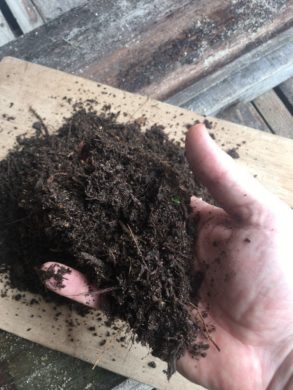 On-site composting is one initiative that is being adopted by many establishments across the hospitality spectrum, as a way to employ an eco-friendly and profitable waste management strategy which reaps ethical and resource benefits. And one remote resort in the Maldives is blazing a trail for the luxury market with its cyclical and autonomous food waste model.

Gili Lankanfushi is a luxury hotel which prides itself on being green – a site built using only environmentally friendly and sustainably sourced materials. But as with any elite getaway, there’s often a high expectation from customers that there’ll be an abundant stream of fresh produce available during their stay.

Achieving and maintaining its premium reputation saw 300 kilos of food waste generated daily – totalling 109,500 kilos per annum. But what happened to this wastage?

Leaving the white beaches and towering palm trees behind, a short sea journey takes you to the island of Thilafushi – a slightly more unsightly and odorous destination that is home to the only municipal landfill site across the 900,000 sq.km archipelago.

And with a population of circa 400,000 and over one million tourists visiting the Maldives every year, it’s apparent that one landfill site poses many problems to both the country’s economy and the environment.

With no other sustainable alternative available, the Thilafushi landfill was the end-destination for the hotel’s food waste – something which went against its environmental integrity. This led the hotel to start its journey into exploring cost-effective alternatives which would not only alleviate its waste disposal headache, but also create a useful resource which could be utilised on site.

It decided to invest in both food waste dewatering and composting equipment, as this option supported the site’s desire to fully close the loop and cut out the waste disposal middlemen. The team at Gili Lankanfushi were excited by the idea of creating nutrient-rich compost, which could be used for its fruit and vegetable growing project in the resort garden. 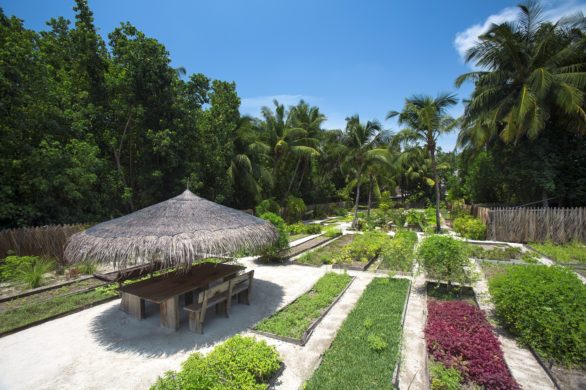 The separation of food waste now starts in the kitchen, where wet and dry waste is segregated into two bins. This is then processed through the dewatering machine – reducing its volume by up to 80% – before the dried substance is fed into the composter.

In 14 days, the organic output is ready and provides the nutrients, structure and moisture retention needed for a successful compost. And on an island where there are copious amounts of sand, but little soil, this presents a greater logistical and financial advantage for the hotel.

The compost is then utilised in the hotel’s on-site cultivation plots, where staff grow fruit and vegetables for use in the restaurant.

Closing the loop and reducing its environmental impact saw the hotel scoop the Haute Granduer Global Hotel and Spa award for the world’s most eco-friendly hotel, in 2017. And given that the resort now composts 100% of its organic material, it doesn’t struggle to store its waste, and nor does it face hefty offshore shipping or disposal costs.

So, what can the wider hospitality landscape learn from this real-life example in the Maldives?

Looking at the supply chain and assessing this against the waste hierarchy tool – as outlined by the EU Waste Framework Directive – is a great place for other hotels and restaurants to start.

Waste prevention is the primary step in this flowchart of solutions, so businesses should first identify actions that can be taken to reduce the creation of waste at source. Once pinpointed, this allows for improvements and adjustments to existing processes to be made – whether in the purchasing and food handling phases, or even kitchen specific enhancements, for example.

However, there’s no denying that sometimes food waste is simply inevitable – especially as this relies on the consumer to also make conscious decisions about the amount of food they choose.

But the truth is that preparation for reuse, recycling and composting, other recovery and disposal are all subsequent stages in the waste hierarchy pyramid, giving hotels plenty of options to divert their food wastage from being landfilled.